The French Marine Chemical Observation and Monitoring Network (ROCCH) was set up in 1974 by the Ministry for the Environment. Its objective is to assess the chemical contamination of the coastal marine environment. All ROCCH activities are coordinated by Ifremer. ROCCH chemical contaminant data are used for international assessments of the quality of the marine environment within the framework of international conventions (OSPAR, Barcelona Convention) and European directives, as well as the monitoring of the quality of shellfish growing areas.

The ROCCH covers the metropolitan coast as well as observation points in Martinique, and Reunion.

The monitoring of chemical contaminants relies on bivalve molluscs, mainly mussels and oysters, used as quantitative indicators of contamination. 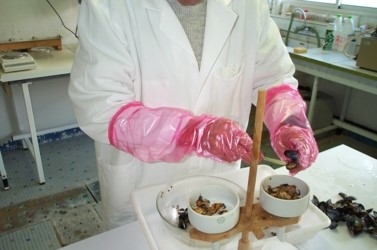 This French Mussel Watch is, since 1979, the main tool for systematic knowledge of the levels of contamination of the French coast. Approximately 150 sampling points (including around ten in the overseas departments) are sampled once a year by IFREMER staff from environmental resources laboratories. The metals analysis (mainly Ag, Cd, Cr, Cu, Hg, Ni, Pb, V, Zn) are carried out in the Chemical Contamination of Marine Ecosystems Research Unit at Nantes Ifremer center, organochlorine compounds (PCBs and dioxins, DDT, lindane), bromine (PBDE , HBCDD), PAHs (16 polycyclic aromatic hydrocarbons and some of their alkylated and sulfur derivatives) and other families taken into account by the regulations (pesticides, insecticides, etc.) are analyzed by partner laboratories. An aliquot part of the samples is systematically kept for possible subsequent analyzes of other contaminants. This made it possible to build up an environmental specimen bank with samples collected all along the french  coastline since 1981.

For an assessment on a larger spatial and temporal scale, contaminants are also analyzed in marine sediments, the first superficial centimeter of which can integrate several years of contamination.

An annual campaign covering different part of the coasts each year makes it possible to cover the entire metropolitan French coastline in six years, in line with the evaluation cycles of European directives. The sediment samples are also stored in the ROCCH specimen bank.

Since 2003, the ROCCH has also implemented an annual monitoring of the biological effects of tributyltin (TBT) on the Channel and Atlantic coasts. These effects are evaluated by measuring the imposex (degree of masculinization of the females of a gastropod, Nucella lapillus).

The ROCCH data are annually presented in  in the annual local reports (Bulletin de la surveillance) produced by each environmental resources laboratories. These bulletins, as well as summaries, are available in the Archimer database. The raw data is available for download on the SURVAL website.

Example of a time series acquired by ROCCH and available on the SURVAL website. 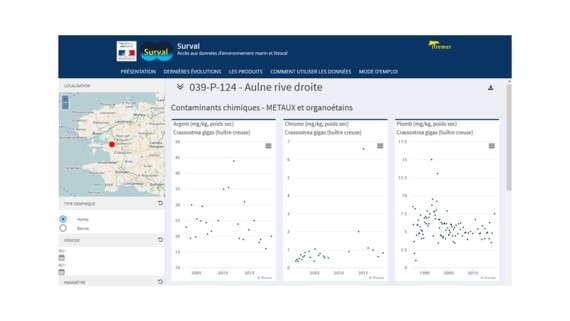