Organophosphate ester (OPE) flame retardants and plasticizers are organic plastic additives and contaminants of emerging concern. Due to their physical-chemical properties, most OPEs exhibit a strong tendency to bind with carbon-rich suspended particulate matter, accumulating in sediments. Marine sediments are also final repositories of micro-plastics (MPs). Determining the environmental occurrence in sediments of both MPs and their additives thus becomes crucial to better understand their current stocks, potential transfer to benthic communities, and possible impacts on the global functioning of marine ecosystems. The Loire estuary represents an ecosystem of high ecological value as well as an ocean/land interface for sea trade and associated industrial activities. Despite the presence of major cities and other potential sources in the catchment area, the presence of MPs is poorly documented in the area, and no data on the occurrence and environmental levels of OPEs is available in the Loire estuary sediments and/or benthos.

The main objectives of the project EXPLOPE are: 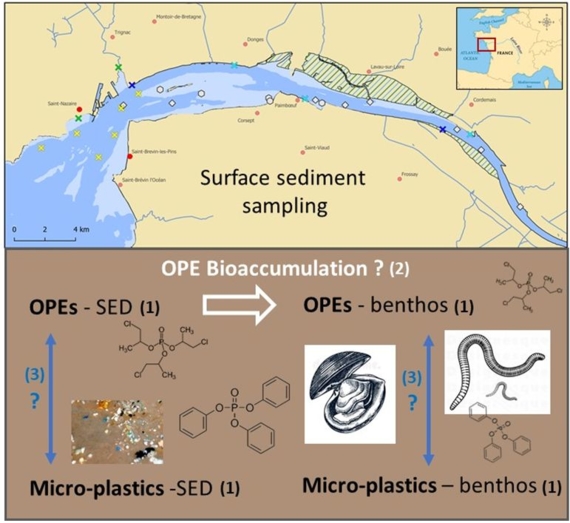 Two sampling campaigns were conducted in the Loire Estuary, in September 2021 and February 2022, allowing the collection of surface sediments and the bivalve mollusk Scrobicularia plana in four intertidal zones subjected to different anthropogenic pressures:

First results have been presented at the SETAC Europe 32nd conference (May 2022) and at the GDR Polymères & Océans 3rth Annual Meeting (June 2022) (references below). In addition, a peer-review paper presenting and discussing the whole data set is under preparation (expected publication in 2023).