Degradation, Biodegradation and toxicity of Oxo-biodegradable Plastics in the oceans

Context and objective: Of the 300,000 tonnes of plastic waste found today on the surface of the oceans, more than half are made of polyethylene.The degradation of polyethylene (PE) by microorganisms is very slow and even when it is coupled with physicochemical degradation (abrasion, UV, waves, etc.), degradation times exceed several decades in the marine environment. One solution proposed by manufacturers consists of integrating additives that promote the oxidation of PE to make it more accessible to biodegradation: oxo-biodegradable (OXO-bio). The lack of knowledge about this product has led to recent measures banning the marketing of oxo-degradable plastic (OXO) in Europe, OXO being defined by the CEN in TR15351 as “degradation identified as resulting from oxidative cleavage of macromolecules”. Our objective was to provide solid scientific data on the fate of OXO-bio at sea, OXO-biodegradation being defined by the CEN in TR15351 as “degradation resulting from oxidative and cell-mediated phenomena, either simultaneously or successively”.  The basis of the project rested on 3 axes to assess (1) abiotic degradation, (2) biodegradation and (3) the possible toxicity of OXO-bio when thrown into the sea.

Experimental approaches: This ambitious project was based on a multidisciplinary approach coupling physics, chemistry and biology. The tests were carried out using 5 industrial films based on low density polyethylene (LDPE) (film 1) additivated or not by pro-oxidants based on Cobalt (Co - film 2); Manganese (Mn - film 3); Co/Mn (film 4); and Mn/Fe (film 5); and mixed with a biobased blend-based polymer (film 6).

We first compared the data on the aging of LDPE in a natural environment, compared to artificial aging, by the action of ultraviolet (UV A and B) and temperature (SEPAP incubator 12.24.H). This process makes it possible to artificially accelerate the physico-chemical degradation processes, which would take several decades in the natural environment in the case of ordinary polymers.

Secondly, we tested the biodegradability of the various OXO-bio films using either a pure strain known to degrade PE (Rhodococcus rhodochrous), or a complex bacterial inoculum from the marine environment. Biodegradation has been characterized from the  point of view of:

Major results: The artificial ageing has shown a crucial role of pro-oxidant additives (Co, Mn and Fe) in the fate of OXO-bio films in the environment. The aging efficiency was more marked on films containing pro-oxidants, compared to PE without pro-oxidants, or to OXO-bio mixed with a hydro-biodegradable polymer. Clear signs of biodegradability have been observed for artificially aged OXO-bio equivalent to natural sunlight exposure of 1 year. 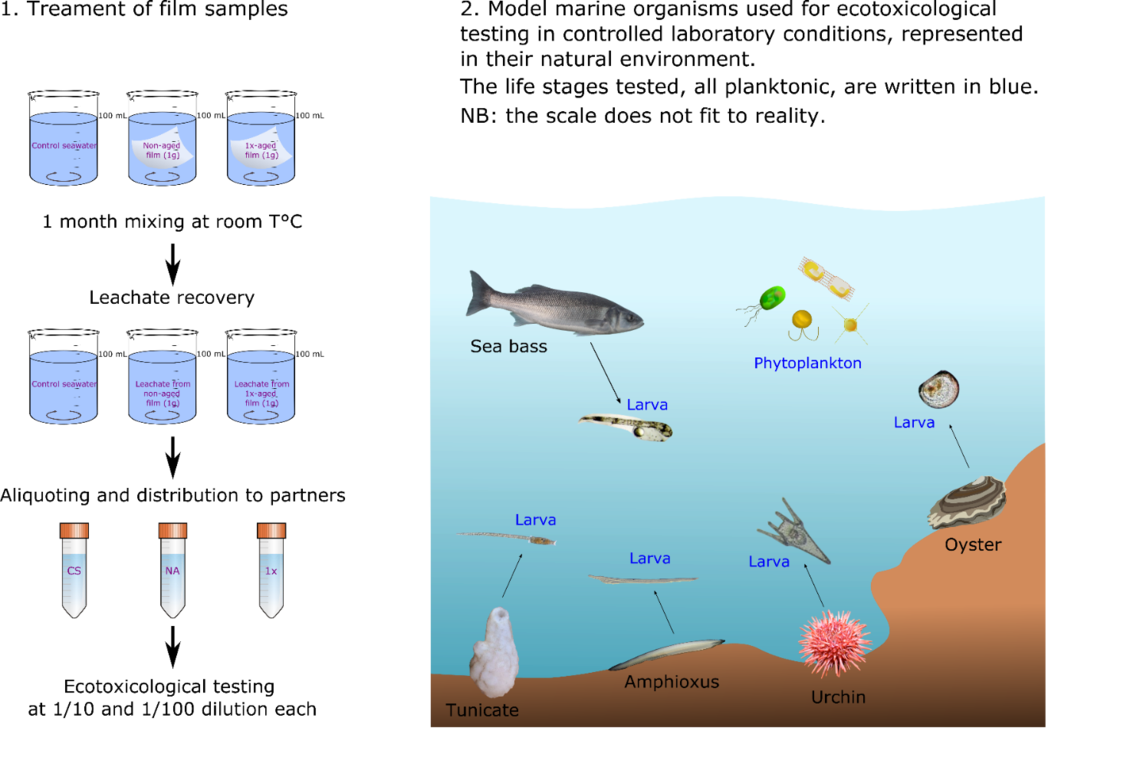